Recently, I was reading an article published by CBC news regarding a pattern of racism at the Calgary Fire Department. Even only one act of racism would be too many. Instead, the article recounts many horrifying stories of racism. One day later, the Fire Department replied to CBC’s story indicating that while the number of egregious incidents of racism have decreased, racism nonetheless still exists within the Department and must be addressed. It is good that the Fire Department plans to take action. But this news story also acts as a warning: Unaddressed racism can grow to the degree that it defines a workplace (or congregational) culture while traumatizing the lives of those on the receiving end of acts of harm.

Thankfully, most of our readers worship in contexts that do not experience such overt acts of racism. This may not give us a free pass, however. Systemic racism, after all, is as endemic to our existence as the air we breathe and also influences our congregations. It is woven into our structures and ways of doing things to the degree that we inherit it as much as we create it. And – just like the fish does not recognise the water in which it swims – so also do we struggle to see the reality of the systems in which we operate. If this is true, how do we tackle systemic racism? After all, many people with whom I speak want to be part of the solution not the problem.

Of course, our written and unwritten policies and procedures do not function alone. Instead, they are aided and abetted by the ideas in our larger culture that influence how we rega 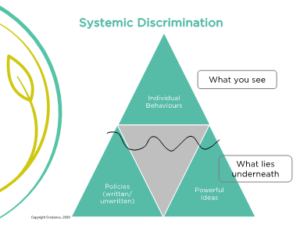 rd one another and the world in which we live. They are also reflected in the individual acts of the people within our congregations. Together, these three are reflected in the diagram below.

Like an iceberg, the triangle model differentiates what we can see from what we cannot see. Individual behaviour we see; our policies and the powerful ideas of our society are harder to see – they lie beneath the waterline.

By way of example, consider the example of the hospital in Joliette, PQ, where a nurse and orderly mistreated and neglected Joyce Echaquan, an Indigenous woman in need of medical care. Joyce died in hospital but not before she recorded the staff as they mistreated her. On our triangle model, the behaviour of the medical staff is what we can see – it resides above the water line. Indeed, the hospital administration dismissed both staff following the media eruption related to this case. According to the logic of the triangle, however, the issue of racism at the hospital will not change until the base of the triangle is also changed – the policies and procedures alongside the powerful ideas that allowed racist behaviours to flourish unchecked until caught on video.

I am fairly convinced that the hospital does not have a policy that promotes racism against Indigenous people. It is likely, however, that the hospital had an unwritten policy giving leaders permission to look the other way when patients like Echaquan were subjected to acts of racism. This is where powerful ideas come in. Powerful ideas are the prejudices present in our society and, often, in our own spirits as well – even if we are unaware of them. At the hospital in Joliette, it is possible, after all, that implicit and explicit racism against Indigenous patients had become endemic in the culture to the degree that the leaders did not consciously realise they were looking the other way when patients were subjected to racism.

Let us assume we want to dismantle systemic racism. Using the triangle model, where do we begin? There are several starting points: (1) When individual acts of racism occur, address it with the individuals involved and go beyond this, too: Use the moment to drill down below the waterline to uncover the underlying congregational policies (written and unwritten) that allow acts of racism to occur. (2) Learning does help. Create a learning culture – a community of faith open to engaging in meaningful – and sometimes challenging – conversations about the powerful ideas that support racism and discrimination in our society. (3) Think about equity more broadly than only eliminating acts of racism. How do our policies and procedures (our way of being) limit or support diversity-friendly congregational communities? Hiring practices? Pay equity? The way we talk about ourselves? The conversations we allow in our gathering spaces? The pictures we hang on our walls?

Several years ago, I was a part of a conversation with a distressed leader of a congregation. He wondered why some in the congregation believed that their leadership was racist. “After all,” he said, “we have many people of colour and they are actively involved in the church.” Following additional conversation, it became clear that while the people of colour were invited to join small groups, become ushers or to serve in the kitchen, they were never asked to sit on Council, or to take leadership roles during worship. When I asked why this was, the leader noted, now with additional distress, that he had not actually noticed this disparity before.

Dismantling racism is not easy. It is difficult to change that which is hard to see. It is also difficult to embrace the reality of racism (seen or unseen) in our congregations. Nurturing equitable congregations, however, is possible. Together, and with some effort, we can create diverse and joyful faith communities that are safe and inclusive of all.

Credence offers a variety of services that deepen the capacity to lead in challenging situations:

Let us help you customize your learning path. We can help you determine your best next step.